After taking a day off for rain on Christmas Eve (Thursday) and a day off for Christmas (Friday), today Sweetie and I hit the road again. It was a cool mostly clear day perfect for exploring.

We headed west on Interstate 10 through Metaire and Kenner and turned north on Interstate 55. Driving through the swampland that separates Lake Maurepas and Lake Pontchartrain, we eventually passed over the Manchac Pass and had a good look at Lake Maurepas. "Joan" told me to turn right on LA Bus 51 and go to downtown Ponchatula for antique shopping.

Actually we had plotted out the trip before we left and "Joan" (the disembodied voice of my navigation system) talked me through all the turns there and back showing me maps to help with the turns. And those turns "Joan" didn't know meant Sweetie got to say "turn left right now" or "right now turn left."

Ponchatula is a quaint and lovely small town with more than its share of good antique shops. In one Sweetie found her favorite treasure of the day --- a circa 1815 Theophilus Bradbury II coin silver spoon monogrammed so very appropriately with the letter "T." Theophilus Bradbury silver (coin and sterling) is stamped with three hallmarks --- an eagle, a uppercase letter B, and an Indian The "Eagle-B-Indian" hallmark gives a clear indication that the spoon was made about 190 years ago in Newburyport, MA. The coffin-end (or coffin-fiddle handled piece) is highly collectible --- and Sweetie found her bargain treasure for $2.50.

After lunch, we found C.J's Antiques on Railroad Avenue -- and determined right off that we would need a full day to really explore all the displays in that shop. Just inside the front door was a 60 gallon pottery crock --- the largest stoneware crock I've ever seen, The 20 gallon one I bought last year seems tiny by comparison. I ended up buying two small crocks to add to my pottery collection and Sweetie had fun finding a few other items she deemed necessary to her existence. We shopped 'til we were worn slap out and got into the car as asked "Joan" to plot us a way back to Perdido Street in central New Orleans.

"Joan" was cranky --- and after five requests to show me the way home, she offered up three routes --- back the way we came (the quick way 1); or east to the north shore of Lake Pontchartrain and across the lake via the toll bridge (the quick way 2); or the long way around through Slidell. I selected the toll bridge.

Sweetie doesn't usually have much of a say-so since I was driving and since "Joan" was "talking" to me. Besides, I've this "thing" for bridges and the notion of driving the world's longest bridge over Lake Pontchartrain was too good to pass up. So with "Joan" telling me where to turn (and with Sweetie gathering up her money to pay the toll), off we came following Quick Route 2.

And I'm so glad we did. One, the bridge is a marvel and two, the skyline of New Orleans from mid-Lake Pontchartrain is worth the trip.

So we returned "home" to Perdido Street, Sweetie, me, "Joan", and the Eagle-B-Indian, tired and worn out. Four cats and a dog were waiting.

Tomorrow I'm not driving --- I think I'll get on the St. Charles streetcar, ride the short distance to Canal Street, get a transfer ticket, and ride the car over to the Cafe du Monde for benignets and coffee. I just may do that about 6 AM and sit eating my benigets watch New Oleans wake up. It may take a double order.

You may wish to check out information about Lake Pontchartrain, Lake Pontchartrain Causeway, Lake Maurepas, and other Louisiana points at Wikipedia. There are also photos online which will show the lake and bridge much better than these show through the windshield at 65 MPH. 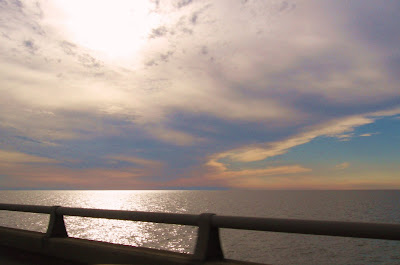 Posted by Terry Thornton at 7:07 PM

"Joan", bah humbug. I'll bet she didn't recommend Middendorf's or Taste of Bavaria for food, like I would have. Glad you had fun in Ponchy, strawberry capital of the world. Nice pictures from the bridge. We have several in our collection over the years of crossings. Enjoy your beignets. Earlier this month I went with friends to the French Qtr. Just had to have hurricanes at Pat O's. (I don't care for rum, but had a sip of one just to be sociable while counting the minutes until I could order cafe o lei and a whole order of beignets for myself before we headed back across the lake. Enjoy the city. Kathi

Kathi,
One, good to hear from you;
Two, next time I'm near Pass Manchac I'll stop at Middendorf's and tell em Kathi sent me (maybe it will make Joan so jealous that she will start behaving herself);
Three, I'm beginning to understand why Louisiana was ranked the # 1 state in HAPPINESS;
Four, Happy New Year.