A stitch in time. . . Block 38 of the circa 1931 Friendship Quilt in the Museum of the Itawamba County Historical Society 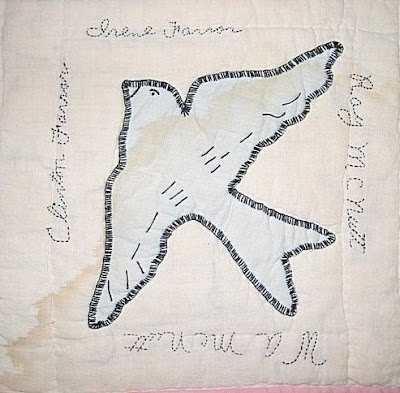 According to Kermit McFerrin, Clinton Farrar was a farmer, an auto-mechanic, and a truck driver. He is buried at Center Star Cemetery.

See information from the 1930 census above at Clinton Farrar.

Kermit McFerrin states that Irene McNutt Farrar worked in the Tupelo Hospital in the nursery for several years during the 1950s-60s. She was the mother of three: Willie Mae Farrar, Mary Ruth Farrar, and Paul Wayne Farrar.

Roy McNutt, 2 year old son of William A and Lessie McNutt, was named on the 1920 census of Mantachie.

William Roy McNutt, son of William A. and Lessie A. McNutt was born 1917 and died in 1936. He is buried at Stephens Cemetery next to his father according to Burton-Cruber.

William A. McNutt is listed on the 1910 and 1920 census of Mantachie as a farmer. In 1910 his household consisted of W.A. McNutt, 35, wife Lessie, 23, and daughter Irene. They were enumerated as living along the Cotton Gin-Aberdeen Road.

Embroider or have your name embroidered on the 2010 Friendship-Memory Quilt being prepared by members of the Itawamba Historical Society. For a donation of $10 per name, you may obtain one of the quilt squares and embroider the names upon the quilt --- or, if you wish, your donations of $10 per name will insure that one of the volunteers on the quilting committee will stitch the names on the quilt. Telephone the Society at 662-282-7664 for information or come by the Society Office, Corner of Church Street and Museum Drive, Mantachie,
Mississippi.

You do not have to be a member of the Itawamba Historical Society to participate in this project --- but you are cordially invited to membership for the low price of $25 per year.