A stitch in time. . . Block 40 of the circa 1931 Friendship Quilt in the Museum of the Itawamba County Historical Society 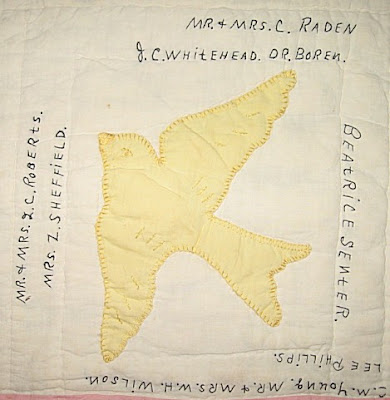 Dr. Fletcher C. Boren was born in the 1870s and served the medical needs of the Mantachie area for more than fifty years. He is pictured in an article at Itawamba History Review, December 9, 2008.

Fletcher C. Boren was the son of Richard and Mary Mitchell Boren of Itawamba County. On the 1900 census of Beat 2, Fletcher is listed as 23 years old along with his parents, Richard M. Boren, 73, a farmer born in Tennessee, Elizabeth Boren, 68 born in South Carolina, brother Robert, 27 and a sister Leona, 20.

Another possibility for Lee Phillips is the two-year-old son of Deputy Sheriff Levi Phillips and Vater B. Phillips. In 1930, according to the census, they were enumerated on Main Street, Fulton.

This may be Clifford Raden 1888 - 1949, buried in Bourland Cemetery according to Burton-Cruber.

This may be Essie Raden born 1893, wife of Clifford Raden. Both have markers in Bourland Cemetery according to Burton-Cruber.

Thanks to IHS member Joe Sheffield for help in transcribing this name from the quilt.

Mrs. Querles Clayton Roberts is Verna Lucille Young. They married 1923 and lived in Mantachie. On the 1930 census, Vernia L. Roberts is 21 years old.

Thanks to IHS member Joe Sheffield for help in transcribing this name from the quilt.

Beatrice Senter was a school teacher. Listed in a residence on Main Street, Fulton, on the 1930 census, Beatrice, 30, lived with her father George J. Senter, 72, and sister Belle, 49.

There is a circa 1918 photograph of Zeke Sheffield at Itawamba History Review, September 26, 2009.

On the 1920 census, Judon C. Whitehead, 27, is listed as a bookkeeper for a local bank. His wife Lola, 22, is enumerated as a public school teacher. The Whiteheads lived in Fulton.

By the 1930 census, the family consisted of Judson C. Whitehead, 37, banker, wife Lela B., 33, a school teacher, and son Judson C., 9. They were enumerated as residing on Clifton Street in Fulton.

Walter H. Wilson, merchant, is listed on the 1930 census of Itawamba County as residing on Bankhead Highway # 78 in Beat 5, District 12. Walter H. Wilson, 38, and Ola Wilson, 31, clerk, were both listed as lodgers in the household of Martha A. Bowen.

The only other information found on this family is within the article by Bob Franks at Itawamba History Review, September 14, 2008, which notes a W.H. Wilson business listing in Fulton in the 1950s. The Mr. Wilson on Block 40 is thought to be one of the owners of Wilson and Wilson, groceries and dry goods store. A business card thought to be dated between 1930 and 1958 is shown in that article.

Most likely this is Ola Wilson, 31, identified as a clerk along with Walter H. Wilson, 38, merchant on the 1930 census. They were lodgers in the household of Martha A. Boren on Bankhead Highway # 78 in Beat 5.

It is possible that "Wilson and Wilson" were a husband and wife team, Walter and Ola Wilson.

Curtis M. Young, a stave cutter, is named on the 1930 census of Fulton. Living on Mattox Street and working at a stave mill, Curtis M. Young was 43 years old. He was born in Arkansas. In his household were son Curtis R. Young, 10, and his mother, John R. Young, 65. [The census image is clear --- John R. Young, female, age 65, is listed as the mother of Curtis M. Young.]

During the Winter of 2009 - 2010 members of the Itawamba Country Historical Society are preparing a new Friendship-Memory Quilt. In late Spring the quilt will be finished at a series of public quilting bees at the Society's facility at the corner of Church Street and Museum Drive, Mantachie, Mississippi. Once completed, the 2010 Friendship-Memory Quilt will be raffled off to a lucky winner.

You can help with this project by subscribing to the quilt (have your names embroidered on the quilt for donations of $10 per name), buying raffle tickets for $1 each, or by volunteering to help finish and quilt the project.

You do not have to be a member of the Itawamba Historical Society to participate in this quilting project --- but we welcome new members anytime.

Telephone 662-282-7664 for information about the quilt project or about the Itawamba Historical Society.