Block 9. A Stitch in Time

A stitch in time. . . Block 9 of the circa 1931 Friendship Quilt in the Museum of the Itawamba County Historical Society 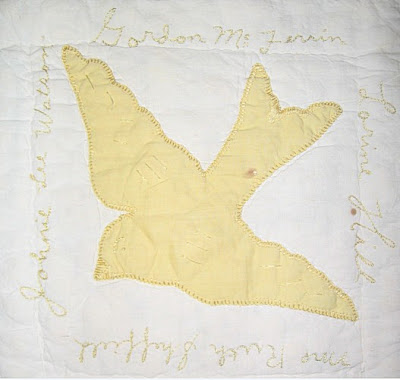 No information could be determined for Lorine Hill.

See additional information at Mrs. Z. Sheffield and at Ezell Sheffield, Blocks 31 and 40.

Ruth Sheffield was the mother of IHS member Joe Sheffield.

Johnnie L. Watson, 19, is listed as the daughter of John A Watson, a farmer in Mantachie, on the 1930 census.

For information about the 2010 Friendship-Memory Quilt Project of the Itawamba Historical Society, contact the Society at its office in Mantachie at 662-282-7664 or by visiting the Society's complex at the Corner of Church Street and Museum Drive in Mantachie, Mississippi.

Posted by Terry Thornton at 7:04 AM