Index of burials based upon names found on the grave markers, 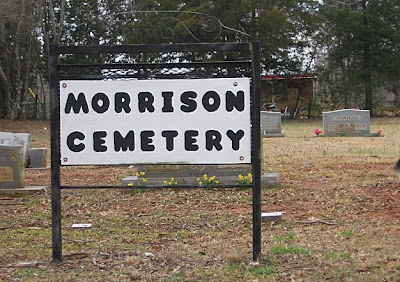 Morrison Cemetery is located on the west side of Cowden Road north-northeast of Hatley. A sign marks the cemetery; there is a driveway for off-road parking. The cemetery contains about one acre and has, at present, twenty burials.

The index below contains the individual's surname, given name(s), year of birth, year of death, name of cemetery, and the image number of the grave marker photograph which also serves as a link (click to view). The abbreviation nod means "no other date."

Researchers are advised to view the grave marker photographs to determine the exact spelling of names, to establish the complete dates of birth and death, and to ascertain the relationships of individuals sharing markers.

Thanks to Sherman Thornton, Amory, Mississippi, for his help in photographing the grave markers.

Additional reading: For an earlier transcription of Morrison Cemetery, see Patricia Horne's April 2006 transcription of the burials online at http://www.rootsweb.ancestry.com/~msmonro2/cems/morrison.html

The Morrison and Davis burials mentioned above as originally at Clover-Ridge Cemetery, Itawamba County, are indexed in that cemetery by Betty Burton-Cruber in the early 1970s in her Cemetery Markings.