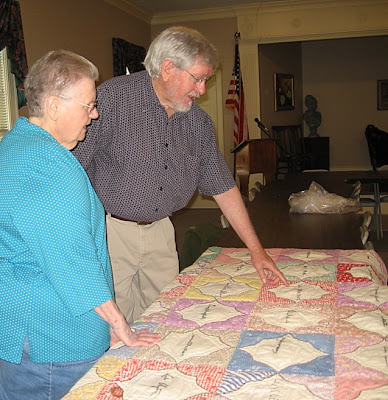 Joe Nell Wood, President of Itawamba Historical Society, left, and Terry Thornton examine a circa 1930 Friendship Quilt from the Sheffield Family of Itawamba County, Mississippi. The quilt, which is in the possession of one of Mrs. Wood's family, was recently loaned briefly to the Society to be photographed and inventoried. The individual blocks of the quilt were photographed and both still and video photographs were made of the entire quilt. Mrs. Wood is preparing a "Who's Who" from the names on the quilt containing family, census and burial information and that research will be published soon.

This quilt is the third one the Society is researching --- the first, a friendship quilt in the holdings of the Society's Bond's House Museum was inventoried in the fall of 2009. The results of that research was published in the Society's quarterly, Settlers, in the Winter 2009 issue and in a series of online articles with photographs here in the series called A Stitch in Time (click to access).

A second friendship quilt is also being researched by Society member Jonnie Rogers. It, too, was inventoried photographically and the names will be researched and preserved in the archives of the Itawamba Historical Society.

Work continues by the Society on a new 2010 Friendship-Memory Quilt which will be raffled off to a lucky winner later this year.

If you have access to an early Friendship Quilt from the Hill Country, please consider contacting the Friendship Quilt Project of Itawamba Historical Society, P.O. Box 7, Mantachie, MS 38855, telephone 662-282-7664 or by sending an email to Terry Thornton at hillcountrymonroecounty@gmail.com

Posted by Terry Thornton at 8:29 PM