A stitch in time. . . Block 12 of the circa 1931 Friendship Quilt in the Museum of the Itawamba County Historical Society 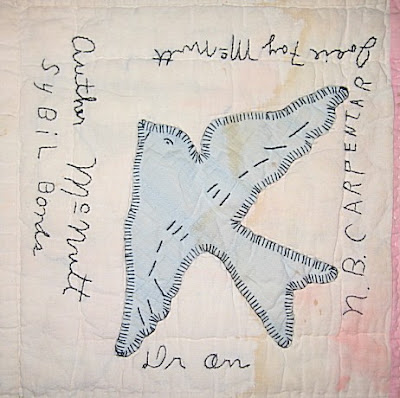 Authur McNutt is listed as a 14 year-old son of widower Sam McNutt on the 1930 census of Beat 2, Guntown-Fulton Road. Sam, 42, was a farmer. Besides Authur, his household included daughters Josie, 11, and Willie, 7, and son James, 6.

According to Kermit McFerrin, Auther McNutt was born in Itawamba County. He married Hazel Simpson McNutt and is the father of Linda McNutt Duckworth and Kay McNutt. He was a large construction builder, a farmer, and a member of the Mantachie Methodist Church. Auther McNutt is buried in Mantachie Cemetery.

According to Kermit McFerrin, Josie Faye McNutt was the mother of Mike McNutt and Andy McNutt. She was a factory worker and a member of the Mantachie Methodist Church.

In 1920, William L. Orr, 35, born in Alabama, is listed as a doctor in Fulton. The census of that year includes within his household wife, Nina F, 28, born Alabama and two daughters Ruth W., 6, and Midge, 9 months, both born in Mississippi.

I've subscribed to the 2010 Friendship-Memory Quilt and the square with my name is ready to be inserted into the quilt (see picture below). Won't you join this fund-raising effort involving the time-honoroed process of making a raffling off a community friendship quilt? Contact the Itawamba Historical Society at 662-282-7664 for details. 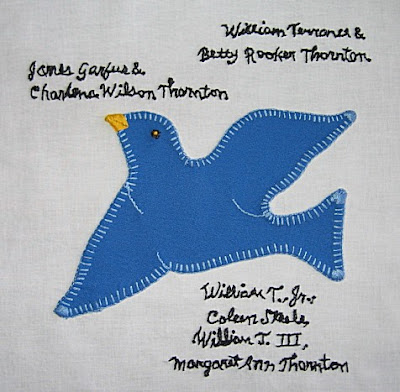 SOURCES:
Family information from Memories from Itawamba County: A Friendship Quilt circa 1931 --- A Stitch in Time by Terry Thornton with assistance from Members of the Itawamba Historical Society, Itawamba Settlers, Quarterly Journal of the Itawamba County, Mississippi, History and Genealogy. Winter 2009, Pages 143-61.

Posted by Terry Thornton at 7:04 AM