A stitch in time. . . Block 33 of the circa 1931 Friendship Quilt in the Museum of the Itawamba County Historical Society 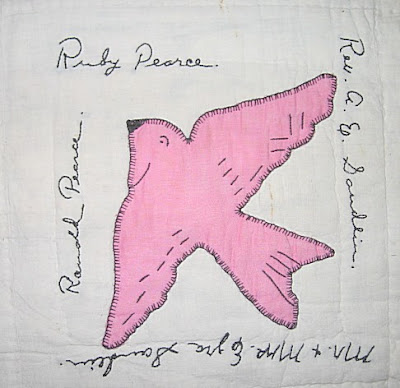 This may be the Ronald R. Pearce shown on the 1930 Lee County census as a 35-year-old filling station worker who lived in the household of the manager of the filling station, Horace B. Lawhorn, 33.

Augustus E. Sandlin is listed on the 1920 census of Cardsville, Beat 3, Itawamba County. Then he was 59 years old and headed a household that included his wife Margaret E., 64, daughter Allie J., 30, granddaughter Anna Nell, 8, and grandson Bradford, 6.

In 1930, Augustine E. Sandlin, 69, is listed in the household of his son-in-law, Hiram G. Pearce, 52. Others in that Itawamba County Beat 3 household on Cardsville-Tupelo Road were Ellanora M. Pearce, 47, and Arley S. Pearce, 17.

Mrs. Ezra Sandlin is identified on the 1920 census of Cardsville as Mary A. Sandlin, age 21.

The Itawamba Historical Society invites you to take part in the tradition of friendship quilts as a fundraising activity. You can subscribe names to be embroidered on the 2010 Friendship-Memory Quilt or you can obtain tickets for the raffle of the finished quilt. Send donations for names and raffle tickets ($10 per name and $1 per raffle ticket) to The Itawamba Historical Society, Quilt Project, PO Box 7, Mantachie, MS 38855.