A stitch in time. . . Block 34 of the circa 1931 Friendship Quilt in the Museum of the Itawamba County Historical Society 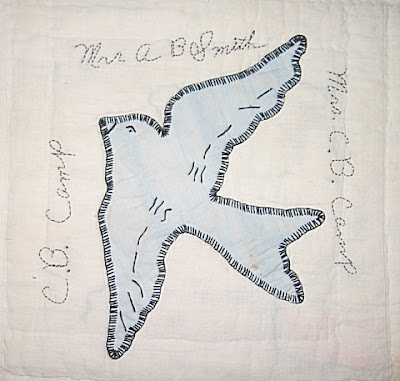 Ruby D. Smith was the wife of Allen Blanchard Smith.

Allen B. Smith is listed on the 1920 Oak Grove census. With him is wife Rubie Smith and two children but the census image page is unreadable for their ages or the names of the children.

This is probably Charlie B. Camp 1893 - 1956 who is buried at Stephens Cemetery of Itawamba County according to Burton-Cruber.

Kermit McFerrin, IHS member from Mantachie, states that C.D. Camp was a long-time educator in Itawamba County, a farmer, and a member of the Primitive Baptist Church. He was his wife Delphia P. Camp had three children --- sons Herman Camp and Charles E. Camp (who was killed in World War 2), and Gladys Camp Franks.

Delphia P. Camp 1896 - ___, was the wife of Charlie B. Camp. Entries for Charlie and Delphia Camp are recorded in Burton-Cruber from Stephens Cemetery.

Stop by the Itawamba Historical Society to view the progress of the 2010 Friendship-Memory Quilt. Watch also for public quilting bees to finish the quilt (beginners and advanced quilters are all welcomed). Obtain additional information by visiting the Society at the Corner of Church Street and Museum Drive in Mantachie, Mississippi, or by telephone 662-282-7664