A stitch in time. . . Block 36 of the circa 1931 Friendship Quilt in the Museum of the Itawamba County Historical Society 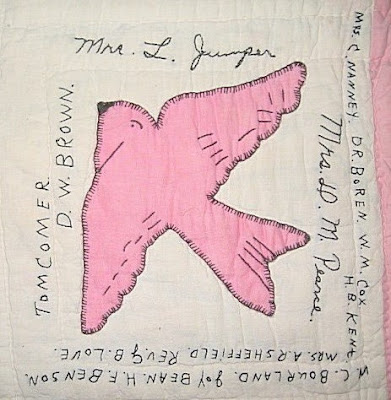 Dr. Fletcher C. Boren was born in the 1870s and served the medical needs of the Mantachie area for more than fifty years. He is pictured in an article at Itawamba History Review, December 9, 2008.

Fletcher C. Boren was the son of Richard and Mary Mitchell Boren of Itawamba County. On the 1900 census of Beat 2, Fletcher is listed as 23 years old along with his parents, Richard M. Boren, 73, a farmer born in Tennessee, Elizabeth Boren, 68 born in South Carolina, brother Robert, 27 and a sister Leona, 20.

Thanks to IHS member Joe Sheffield for assistance with the W.C. Bourland family.

William Chester Bourland 1890 - 1983 was the Postmaster of Fulton Post Office around 1950. He was the son of William Baylis Bourland and Edora Elzira Rutledge Bourland, farmers from Cardsville.

On the 1900 census, William C. is listed as a 10 year old in the household of his parents in Beat 3 Itawamba County.

Dilliard W. Brown, 36, a lawyer, is listed on the 1930 census of Beat 5, Itawamba County. His household was located on Fulton-Smithville Road # 25 and included his wife Charley M. Brown, 32, and son Charles D. Brown, 9.

Loraine Jumper was the wife of the Reverend Mr. Leonard Jumper; see entry above.

Most remember Mrs. Jumper, however, as "Susie" Jumper. See additional information at Elder

On the 1910 census of Tremont Precinct, Burl Kent, 28, a farmer and his family lived on Tremont-Pikeville Road. In the household were enumerated wife Lela, 23, and sons Lavon, 4, and Laverne, 2.

According to the Oak Hill United Methodist Church history (1903 - 2003), G.B. Love served as pastor from 1924 - 1927. Oak Hill UMC started as a Methodist Episcopal Church South and their centennial project history booklet is posted online. During the years 1925 - 27, the Reverend Mr. Love received a record number of new members into Oak Hill UMC, 47 members.

It is most likely that the name on quilt block 36 is Francis A. Pearce, wife of David M. Pearce listed on the 1930 Mantachie census on Tupelo-Guntown Road. The household consisted of Mr. Pearce, 60, a farmer, his wife Francis A., 65, son Alford R., 35, and daughters Ruby E., 32, and Nettie J., 26. Nettie J. Pearce was enumerated as a public school teacher.

Two possibilities for this name were presented in the 1930 census. A more in-depth study of the families of Itawamba County will probably reveal other candidates for Mrs. A.R. Sheffield.

Mrs. A.R. Sheffield could be Annie Sheffield, wife of Evert Sheffield, a farmer in Beat 3.

Help appliqué the birds on the squares of the 2010 Friendship-Memory Quilt; help embroider names on the quilt; help quilt the king-sized cover at a series of public quilting bees at the Itawamba Historical Society, Corner of Church Street and Museum Drive, Mantachie, Mississippi.

Can't come to learn these time-honored crafts? Then donate $10 per name to have you family recorded on the 2010 Friendship-Memory Quilt or donate $1 per raffle ticket for chances to win the finished quilt.