A stitch in time. . . Block 35 of the circa 1931 Friendship Quilt in the Museum of the Itawamba County Historical Society 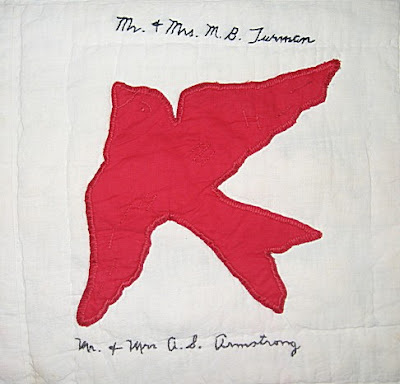 According to IHS member Kermit McFerrin, Alva S. Armstrong owned the Bonds House (now the Museum of the Itawamba Historical Society in Mantachie) for several years. Mr. Armstrong was a Deacon in the First Baptist Church of Mantachie. He is buried at Center Star Cemetery.

Florence Turman is listed as the wife of Marcus/Martin B. Turman on the 1910 and 1920 census of Itawamba County. In 1910 the Turmans are listed as residing in Greenwood, Beat 4; in 1920 they were enumerated as residing in Beat 3. In 1920 the household consisted only of Florence, age 53, and Marcus B. Turman, age 69.

Help appliqué the birds on the squares of the 2010 Friendship-Memory Quilt; help embroider names on the quilt; help quilt the king-sized cover at a series of public quilting bees at the Itawamba Historical Society, Corner of Church Street and Museum Drive, Mantachie, Mississippi.

Can't come to learn these time-honored crafts? Then donate $10 per name to have you family recorded on the 2010 Friendship-Memory Quilt or donate $1 per raffle ticket for chances to win the finished quilt.